Does anyone else have a little miss who is obsessed with all things ‘fairy’? I think it’s a prerequisite of girlhood. My daughter just turned five. She spent the last few months deciding which birthday cake she wanted (and then changing her mind on a weekly basis). I loved hearing all of her ideas and suggestions. But was secretly hoping she’d settle on just one!

I used to love looking through cake decorating books as a child, finding ideas and inspiration for my mum. Aren’t we lucky these days that we have Pinterest? My daughter was spoilt for choice! In the end she couldn’t decide. I promised to put something together for her that was very pretty, girly and ‘fairy like’.

Being a bit crafty, it’s no surprise that I love decorating cakes as well. I’m by no means an expert, but it’s something I enjoy, and the kids really seem to love their cakes. And that’s the main thing isn’t it? Here’s how I put this one together. And it only took a few hours from beginning to end. I baked a basic vanilla cake and added pink food colouring to tint it pink. While it was cooking, I coloured some fondant with different shades of pink and made some toadstools, butterflies and flowers. I have a cute flower punch that makes it so easy! 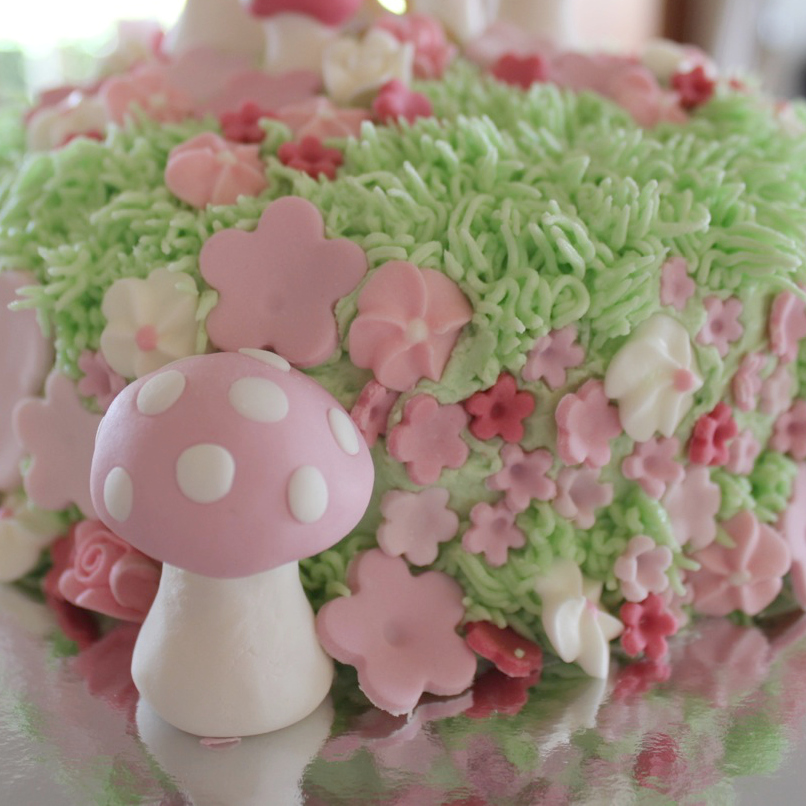 Using thick green-tinted buttercream, I iced the cake all over. Then using a Wilton hair / grass icing tip in my piping bag, I created the ‘grass’ all over the cake. I placed a resin fairy figurine in the centre and surrounded her with toadstools. I also added a few toadstools around the base of the cake. Then it was just a matter of placing my homemade fondant flowers and butterflies, along with a few store-bought royal icing flowers, all over the cake. In truth, the cake would have been more elegant without the excess of flowers. But I’m not known for elegance or restraint! I think it looks fun? And it’s made with my favourite colours – pink and green!

I also made some toadstools for the party, by using white chocolate to ‘glue’ two marshmallows together on a lollypop stick. Then I dipped the tops in white chocolate and sprinkled with 100’s & 1000’s. So cute! And this is a much quicker and easier alternative to making cake pops. The fairy food was a huge hit at my daughter’s ‘fairy disco’ party! I may not be a food photographer but you get the idea anyway.

Now we’re already thinking about next year’s birthday cake and theme. What has been your favourite birthday party theme or creation?

This post was written by Lauren Wright and appeared first on http://www.MollyandMama.wordpress.com